I'm only 21, can cook OK, but I'm having trouble with the range of food I cook...
For example, I can make a stirfry, pasta dishes etc but they all seem to be pretty similar, does anyone know a book or have any recipes that are easyish and different?
I feel I'm boring FH with my dinners as they all seem fairly basic and amateur. Another issue we have is that FH is Maltese and I have no idea how to cook any traditional Maltese dishes.. Any tips on how to please my ever-hungry FH?
Top

Start out with simple stuff. Baking is the easiest thing in the world to do so maybe find some recipes that require baking and try those out first.

Like meatloafs, quiches, roasts and stuff. We don't have a HUGE variety when I cook but it's enough that no one's bored by it. If I didn't do alot of baking, we'd be sunk

Have a look through taste.com.au they have SO many really good recipes on there. It's easy to cook something when you have the recipe right next to you as well.
Top

I agree taste.com.au is the best site ever! And if you are after an easy cook book, any od the womens weekly ones are awesome I love them, you can get them fairly cheap at any newsagent and they have lots of different styles and cuisines and recipes a;ll with pictures which I love!
Top

Thank you both, I go on taste.com.au pretty regularly but because I don't know dish names I find myself typing in the same stuff over and over again haha

Are meatloaf and quiches easy to make? What would you recommend I start off with? I know you can get cheese and bacon quiches.. are they easy?
Top

Quiches and meatloafs are abit fiddly to get ready for baking but pretty simple once you get them in the oven because they just bake!

I don't really make a quiche, I make more of an egg pie haha. I just chucked everything in. I get about a dozen eggs, I stir them til they're abit bubbly.
Then I cut up mushrooms, capsicums, tomato, bits of ham or pre cooked bacon or whatever you like, sometimes carrots and broccoli and mix it into the eggs. As I said, I literally put in anything in the fridge that's a vegie

I don't bother with pastry because I always make it soggy somehow. So I put that in the oven at about 180 (fan forced) for about half an hour and then put some grated cheese on top and leave it for another fifteen minutes and ta da! You have my version of a quiche haha.

Meatloaf you need a few things.
Beef mince and a pork or sausage mince to bind it together. Squish those together then mix in two eggs and some breadcrumbs to bind it some more. Then lots of spices! I use again, just about everything in the cupboard!
Off the top of my head, I use salt, pepper, oregano, garlic, onion, cinamon, sometimes I grate a lemon skin and add that. Add all that and squish it into the meat and then mold it into the shape of a loaf. Then I mix tomato sauce, BBQ sauce and worchester sauce together and put abit on top. Bake it for about 45 minutes, then take it out, add more sauce and bake it for another 20 minutes and you have meatloaf!
You can also miniturize that and make rissoles as well. I'm the queen of bakes. Tuna bake, pasta bake, potato bake.

It SOUNDS really fiddly but it's really easy and quicker than it sounds. Once it's baking you can pretty much just walk away and forget about it. I'm sorry I don't have proper recipes, I learned from watching my mum.
Top

yeh what Jessie said is like a frittata- search for Frittata on taste.com.au, thats really easy and my FH loves it! its similar to quiche but no pastry, and its great for using up leftovers!
Top

cabaret
I need a title

Annie&Pete wrote:
Another issue we have is that FH is Maltese and I have no idea how to cook any traditional Maltese dishes..

Maltese food is insanely easy and basic. I mean, if my Nanna, queen of hatred of cooking can cook them, then hey, easy peasy lemon squeezy.


Pastizzi is the most commonly known Maltese dish, supermakrets sell them frozen. 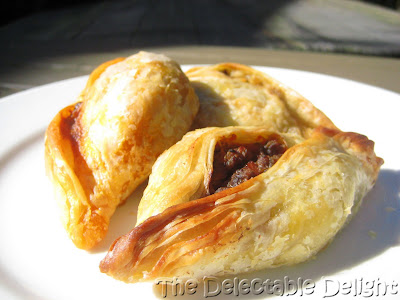 Theyre diamond shaped pastries made from puff pastry and filled with either
ricotta and spinach
browned beef mince
mushy peas
Then baked.

Minestra, which is pretty much any mixture of vegetables you want soup as long as its full of beans (bertolli mostly, but also with cannellini and kidney) and some pasta or rice added. The really authentic way is to make a stock out of the beans first and use that instead of vegetable/chicken stock.

Imqarrun is is baked bolognaise sauce, egg and macaroni baked
Ross il-forn is exactly the same, but with rice instead of macaroni
Timpana is the same as Imaqrrun, only you slice up boiled egg in it and put a sheet of pastry on top before baking, so its like baked pasta with a pie lid

Bragjoli is thin slices of ham or beef wrapped around ricotta cheese, crumbed then fried

Torta tal-irkotta is a ricotta pie, pretty much


Reciepies are dependant on what part of Malta your partner's family come from. My Nanna's family is from Valetta and my Nannu's family were from Hagar Qim and my Nanna and Great Aunt Antida used to fight over the correct vegetables to use for stuffat tal-qarnit (namely, the addition of cabbage, my Nanna swears by it, and Antida used to chase her around the house with a rolling pin for putting it in) So going on that its probably best to ask one of his relatives, hehe. But you can certianly google them for the base recipe.
Top

Cimbom
I need a title

I got this great recipe book from Target called "One pot dishes" or something like that. It has hundreds of dishes that are quick, easy and taste great. I use it mostly during the week as I take a packed lunch to work.
Top

bridek8
I just love to talk

We had this issue a few years back too.
We wrote down all the meals that we make or our parents make that we liked and that list is on the fridge. At the start of every week we go through the list together and pick six meals we want from it and then do the grocery list and shopping. (one night is takeaway night)
The list is huge and has really simple things and really elaborate things.
I find doing it this way good coz FH is involved and he doesn't whinge about what we make coz he has picked it..

Thanks for the replies everyone

As for the Maltese dishes... I mentioned I wanted to learn to his mum, so now I've been roped in to learning how from them ha ha which is nice

I don't have a slow cooker but my mum does, but she always made casseroles with wine and I hated them, is there much you can cook in them?
I think I'll invest in one..

cabaret
I need a title

I have two nights a week where I work late and usually once a week I make minestrone in my slow cooker. Definetly worth it.
Top

EternalWillow
I just love to talk

Hey yeah, I was going to suggest that you ask his mother or nanna or aunties, etc. how to make Maltese food! As well as learning how to make his favorites, it's always a nice way to do some bonding with the family.

In my house we have a rule - I cook the Western food and FH cooks the Eastern food and never the twain shall meet! Haha. I try not to cook Asian because he always finds something wrong with it! So I stick to doing what I know, and sit back and enjoy what he cooks up when it's his turn.